The 2022 British Nationals continued today with the Semi-Finals  at the National Squash Centre.

All the action takes place on the Glass court, and you can follow the matches on Live Scoring and our social feeds, Watch Live on SquashTV and more, and we’ll have reports and reaction right here with a roundup to follow at the end of the day.

England’s No.3 seed Jasmine Hutton has progressed through to her second nationals final after overcoming No.1 seed Emily Whitlock at the National Squash Centre in Manchester.

Hutton stormed out of the gates on the hot and bouncy all glass court in the opening game and took the pace to the No.1 seed immediately. The crisp hitting of Hutton was giving Whitlock no time to impose her excellent short game and controlled lobs.

After taking the opening game 11-9, Hutton continued to pile the pressure onto the Welsh No.2 and started to move Whitlock into the front corners more consistently to test her movement. Whitlock appeared to be struggling with her movement in the latter stages of the game and lost it 11-6.

Before the third game could even begin, Whitlock was unfortunately forced to withdraw through injury, handing Hutton the victory and a place in her second British nationals final. 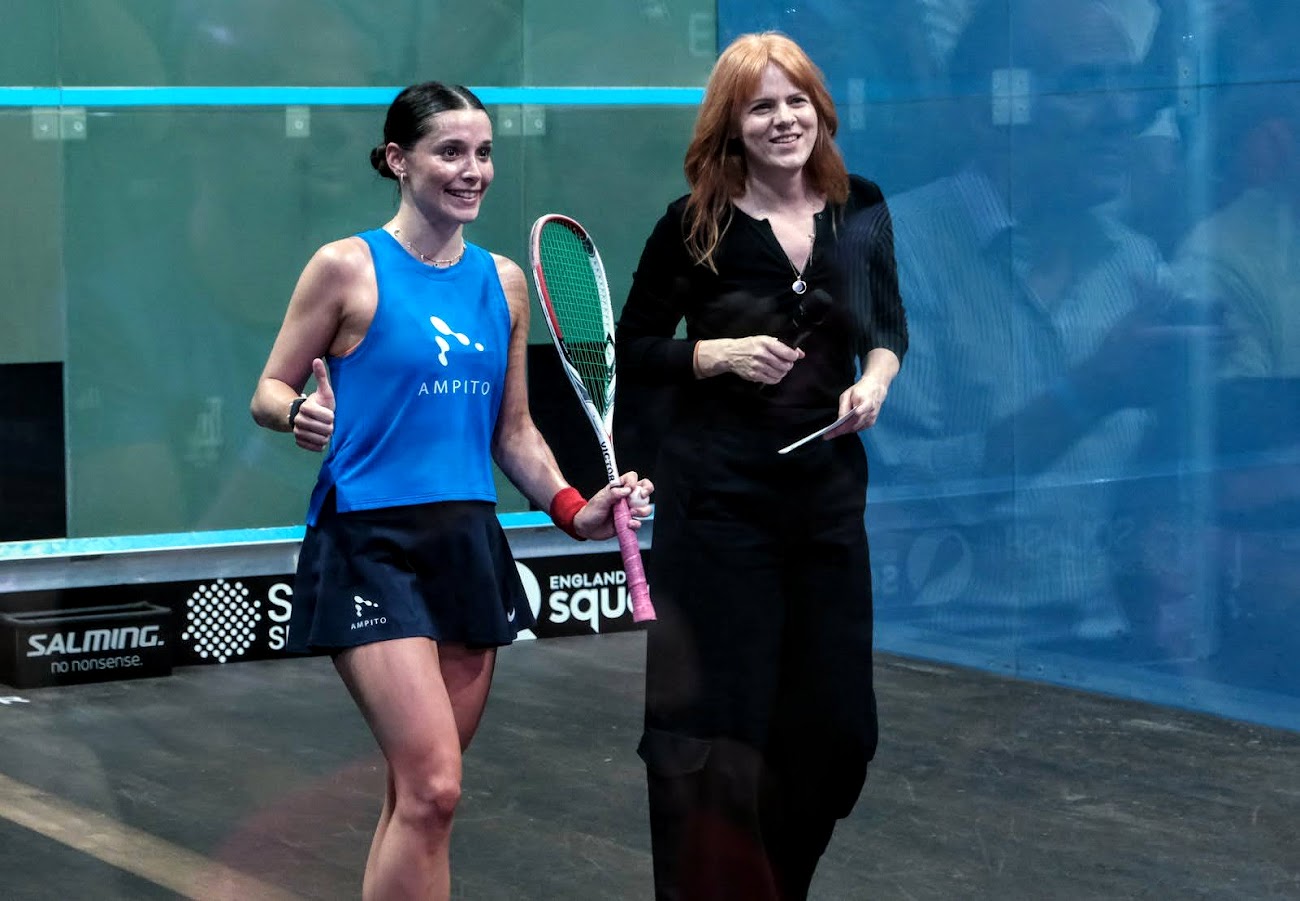 “It’s not easy to come through after a retirement, I hope Emily gets better. We have a packed schedule at the start of next season so it’s better to pull out than make it worse.

“I really love a bouncy court, I don’t mind the heat and I was thriving off it, to be honest. I love how quick you can play and you have to react quickly and I really like playing at that pace. I tried to get a good length and then attack when I could.

“Back in 2020, it was really weird, I had never seen two withdrawals to get someone through to the final. I like to think that might give me an advantage having already been in a final and I’d like to think I’m a better player now than I was then and hoping to be strong again tomorrow in the final.”

Wales’ Joel Makin was next onto court and confidently booked his place in his third consecutive British nationals final with a win over talented Englishman and World No.21, Patrick Rooney.

With the hot temperature in the venue, the ball was extremely lively throughout the match which played into the hands of the Welshman as he moved the ball at a fast pace to the back corners to put work into the legs of Rooney. Errors flowed from the racket of the England No.2 which handed Makin a 1-0 lead.

This continued in the second game as Makin established a healthy lead at 8-2. From here, however, Rooney started to showcase his excellent touch at the front of the court and strung together a flurry of winners to level at 8-8. Makin got back to his stubborn style of play to close out the next three points and earn a 2-0 lead.

The second game seemed to take its toll on Rooney and the streetwise Makin recognised this and started to turn the screw in the third game. He continued to pummel the back corners and restrict the Englishman’s attacking opportunities to run through and take the game 11-6 and book his place in the final. 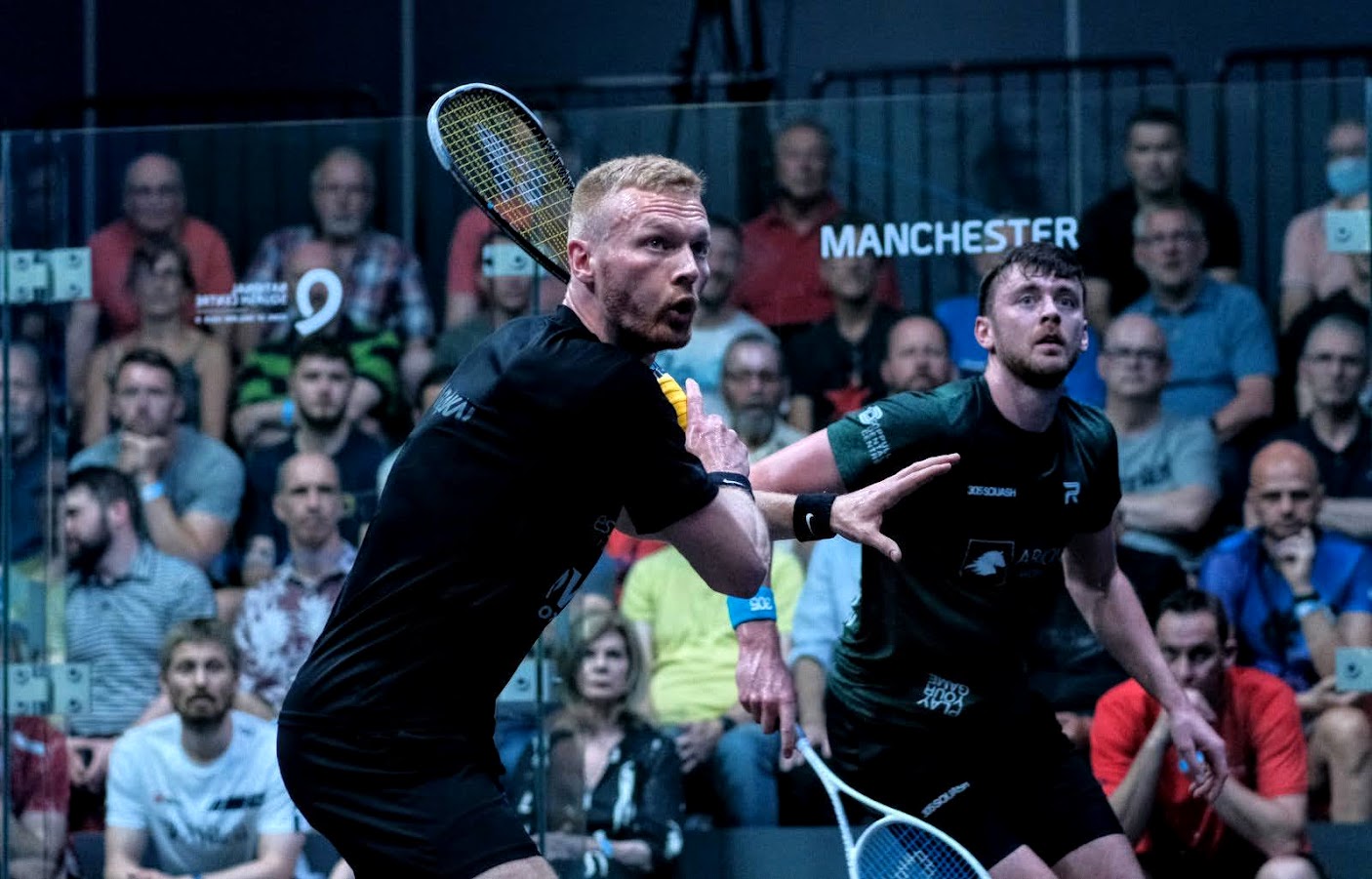 “Patrick’s got those threats through the middle, so you’ve got to take him away from there. In the middle of the second game, I hit a crosscourt and he was all over it, making me work but once I got it past him I got him trying to force it from behind me and that’s where I need to be.

“I play a pattern-based game, I try to stick to my game plan. I’m putting some short balls in and know it’s the right shot, I’m not going for anything drastic from behind so just keep plugging away and putting work into him and it might take some time to get the reward for that.

“What a great place to be [on a hot court]. I was enjoying it, there were probably three decisions in the whole match, great free-flowing squash and sometimes you don’t get that continuity of play on glass courts with court cleaners and reviews but that was just hard squash. It was good quality so pleased to be through.

“It’ll be interesting to see how James [Willstrop] is moving, when he’s moving well he’s a danger to anyone so I’ll get some physio and sit back and enjoy that one.”

No.6 seed Lucy Beecroft produced a stunning comeback to recover from two games down to defeat No.2 seed and World No.25 Lucy Turmel to reach her first nationals final.

Turmel is ranked 30 places higher than her opponent in the PSA rankings as she currently sits at World No.25 and that gap showed from the very start of the match. Turmel was able to settle a lot sooner than Beecroft and hit her targets on the Manchester glass court more precisely and consistently to which Beecroft had no answer to in the opening two games.

Despite Turmel’s dominance, back came Beecroft. The Northumbrian utilised her aggressive boast on both sides of the court to drag Turmel up the court and put work into the legs of the No.2 seed. Beecroft saved four match balls to take the third game 13-11 and breathe more life into the entertaining encounter.

Beecroft showed no signs of slowing down however and continued to find amazing winners to move further ahead on the scoreboard. The World No.55 ran straight through and set up a fifth and final game, winning the fourth game 11-7.

The No.6 seed completed the impressive comeback by the same scoreline in the fifth game and booked her place in her first British nationals final. The scoreline remained tight throughout the final game but Beecroft managed to pull ahead in the business end and convert the match at the first time of asking.

Beecroft had this to say after her win: 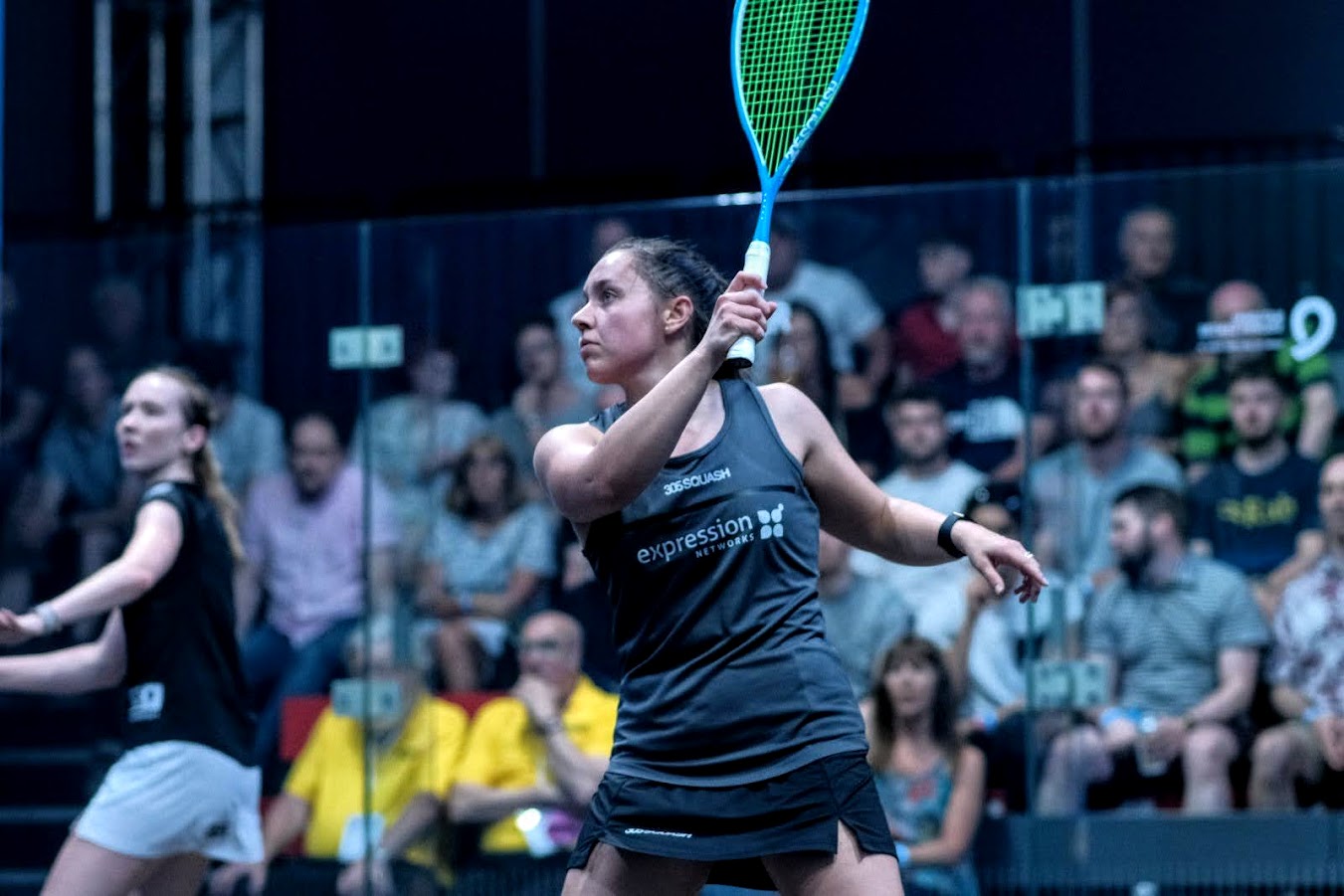 “It was all or nothing for me there, I felt like the first three games, she was completely controlling the pace and I was on the back end of every rally and I don’t want to play like that. I tried to not focus on the score and just play each point as it is. I tried to just leave it all on there and my arm relaxed and the ball started to soften up which went in my favour in the fourth and fifth, so I’m shocked.

“I wasn’t necessarily thinking about the new ball in the third but once I got that game I thought it would open up and the first couple of points in the game, the ball wasn’t coming out the back as much. But I’m just really proud of sticking in that one and getting the win.

“I think the last time Jaz and I played I snuck it in four but Jaz is a great player and I’ll have to be on my game tomorrow. I was actually supposed to fly back to America tomorrow morning so I guess I’ll have to change that flight.”

No.1 seed ElShorbagy overcame four-time champion James Willstrop in a difficult four-game battle to move into his first final in his maiden appearance in the British nationals.

The former World Champion controlled the opening two games of the encounter and used a devastating mix of pace and control to move the tall frame of Willstrop into all four corners of the court and mop up the loose retrieval of the Englishman.

With ElShorbagy leading 2-0, the arm of Willstrop completely relaxed and ‘The Marksman’ came to life. The undoubted skill and touch of the former World No.1 came to full fruition as he attacked the front of the court with superb accuracy and consistency with the score reaching an impressive 10-0. ElShorbagy managed to score a point on the board to avoid the dreaded ‘bagel’ but it was Willstrop who secured the third game.

In what was arguably the game of the tournament, the No.1 seed closed out the match, winning 14-12 in a quality fourth game. ElShorbagy kept setting himself up with match balls but the Englishman wouldn’t go away and refused to be beaten easily. After saving four match balls, another brutal rally finished the tournament of Willstrop as the No.1 seed booked his place in tomorrow’s final. 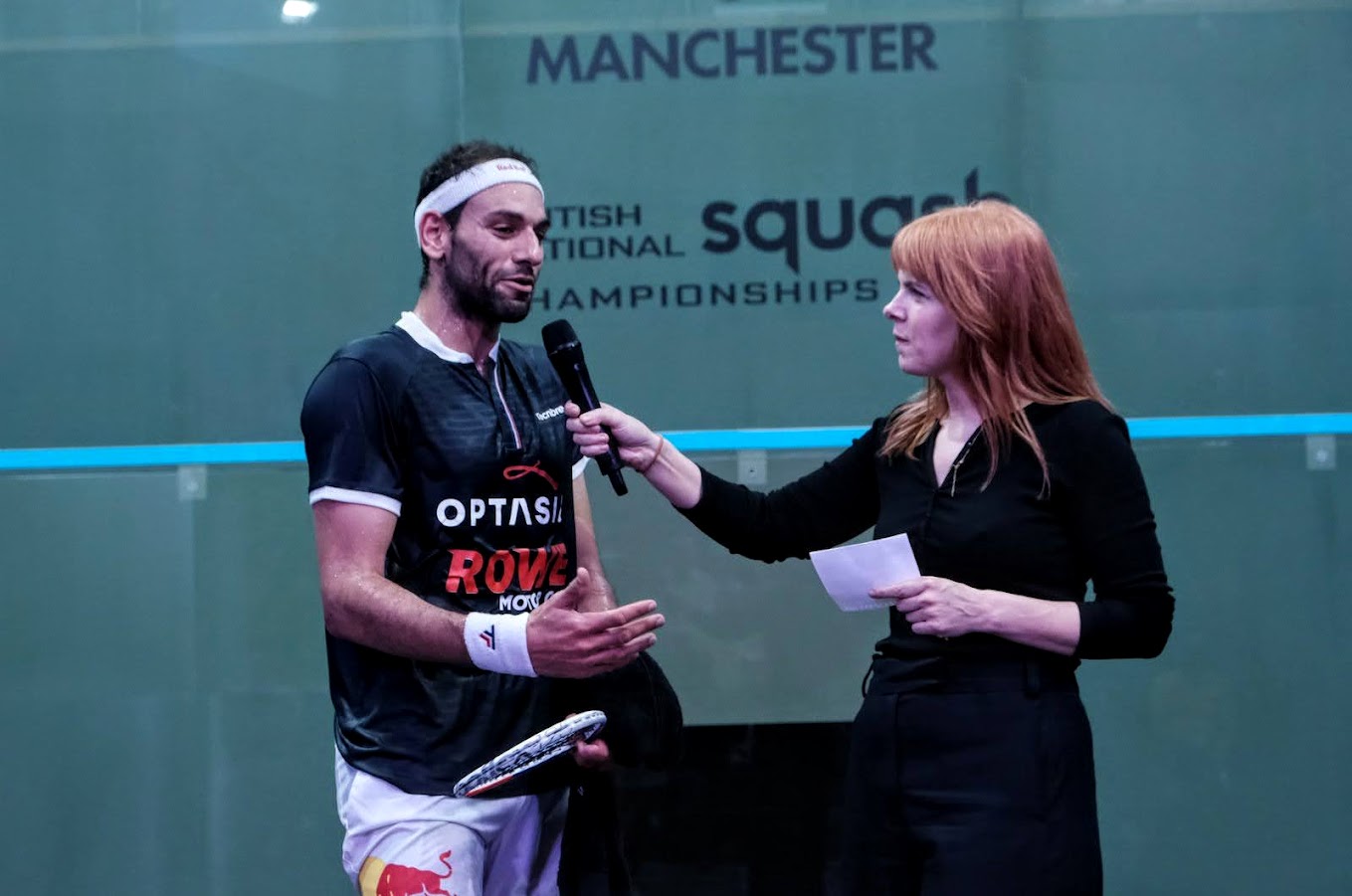 “Full respect to James, I could see from mid-way in the second game he was getting better and better. In the third game I might have had a bit of a lapse of concentration, but your opponent still has to be 100 per cent focused to win every single point. It was unbelievable he stayed focused for 10 straight points like that.

“In the fourth it was all to play for. It was such a high quality match, and I always feel like we enjoy playing each other because there is always good squash played fairly and in a good spirit. We played in Mauritius last week, but that was his first tournament in ages, so you can see he keeps getting better and better.

ElShorbagy lost out to Makin at this venue during April’s Manchester Open and said: “Joel and I have so much respect for each other. On paper we are the two best players in the country right now, so it’s fitting that we are in the final to hopefully play a good quality match for the English crowd here.”